Have you ever wanted something unique for yourself? Maybe you wanted to stand out from the rest when it came to a birthday present, maybe you wanted to give something both meaningful and funny to a loved one? Well for exactly those purposes, the name a star company exists, allowing you to name the stars of your own choice. In this “name a star review“, we’ll be looking in detail at the quality of the service.

The place to buy: globalstarregistry.com

Now quite obviously, this gift is symbolic. As we have already mentioned in one of our previous post: “Name a star as a gift? Is it legitimate?” you cannot actually, legally own a star. The same way you would a phone, nor can you put a leash on it and take it for a walk, given that it’s a ball of burning gas trillions upon trillions of miles away. This factor alone makes owning such a thing a fairly daunting task, not that it hasn’t stopped people from complaining and suing, despite name a star clearly stating this.

Now, what are the good things about this business? Well firstly, the business idea is quirky and creative, which makes it an interesting thing by itself and grabs our attention. However, this isn’t enough by itself to make buy a star name as a good product.

So let’s have a look at pros and cons:

+ What I like the most about this company and why I have chosen them for my “name a star review“, is that they are clearly describing the services.

a. The company is just providing a service to name the star and naming the star is a kind of symbolic and novelty gift.

b. All stars which are named thru their company are not and won’t be recognized in an official body. The official body means the International Astronomical Union (IAU).

c. They are informing as well that the star can be named only once. Means two person cannot name one star.

d. The most important thing is a declaration about owning a star. It is clearly written that nobody can own any celestial body neither stars.

+ The second pro goes to their 4 different packages: Standard, Zodiac, Orion and Ursa Major. All of them include a star certificate, talking about stars in general, as well as your delegated choice in star, as well as a star map, which allows you to find your star easier on the night’s sky. The first two and the final one (Standard, Zodiac and Ursa Major) include a silver-coloured pendant inscribing the name and coordinates of your star, while the Orion package does this in gold.

+ All of the packages are also included a gift package, and the zodiac package lets you pick a constellation.

Just have a look at the prices below 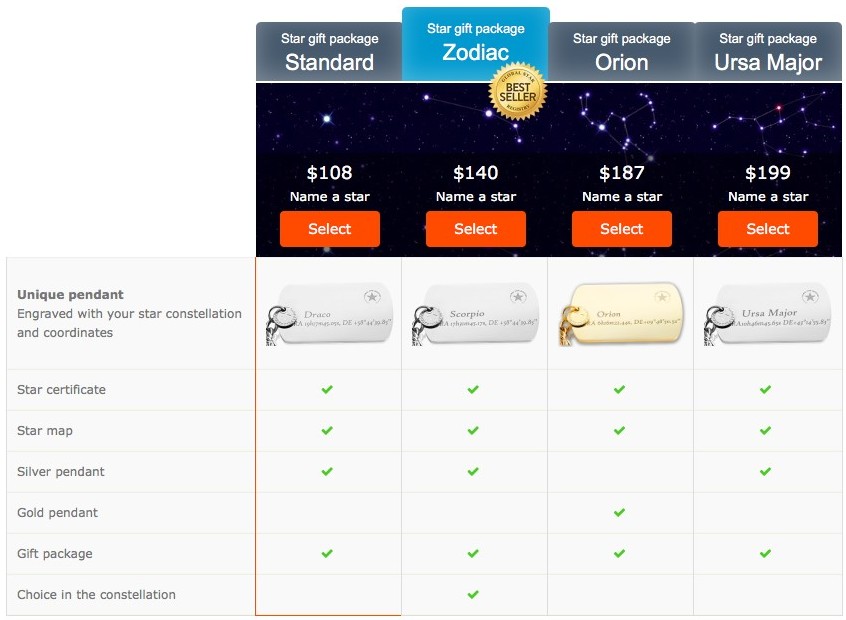 + The company allows refunds within 30 days, which given that this is a highly symbolic gift is quite odd, especially seeing that this is something many people may consider doing, the fact they have this gives us confidence that the product is of really good quality.

+ 5% of the company proceedings are donated to charity, in this case, Medicins Sans Frontiers, which I think is great. This charity donates money to people in need and disaster struck regions.

However, we are not saying that name a star is a flawless product.

– Firstly there’s the rather steep cost, while the product may be of high quality. As you see just the standard package is $108 by itself. Reaching up to $199 for the Ursa Major package, which is only marginally more expensive than the Orion package. The most popular one, Zodiac, costs $140, which regardless of materials used in production, leaves a sour aftertaste.

– What about refunding process? In this case, the customer must pay all the additional fees, like shipping and this may be why so many people don’t ever try to refund, however, it’s more likely to simply be the quality.

In conclusion, we’ve determined that while name a star is a trustworthy and transparent business with a very quirky and fun product, it’s not without any faults. With the returns policy leaving plenty to be desired, and the prices being not for those of a shallow wallet. However, with that said, we thing name a star provides an excellent service all in all.

If you have any question about this name a star review please leave them below, we will be more than happy to answer them.